“Beauty comes in all shapes and sizes and always has and always will” say Robyn Lawley, the first plus sized model to be featured on Austrialian Vogue. Australian Vogue will feature its first plus-size model in next month’s issue of the magazine.

Robyn Lawley, who wears an Australian size 14, was cast for a ten-page spread for the September addition of the magazine, making her the first full figured model to be featured in the magazine since it started 52 years ago.
In the spread, entitled ‘Belle Curve,’ the Sydney native shows off designs by Australian designers Alex Perry, Willow and Carla Zampatti.

This is not the 22-year-old’s first time in the spotlight: she has made previous appearances in Vogue Italia and Australian Cosmopolitan, and stole the spotlight on the cover of French Elle in April.

Kirstie Clements, the editor for Vogue Australia, called Robyn a “super-duper model,” saying that she was not cast based on her size.
“She’s really beautiful and you have to make the judgement about whether a girl’s special or not, so it really wasn’t about size or to make a statement,” said Clements

Robyn, who now lives in New York City, has spoken publicly about working in an industry dominated by thin figures.

Entertainment tonight did an interview with the Beautiful Mark Sallings about his recent episode on “Glee” where he was longing for the attention of the character Lauren, portrayed by the big and beautiful actress Ashley Fink.

ET interviewed real men who adore plus-size women and found many man are attracted to the size and beauty of women that aren’t your typical skinny model type. The attitude and the personality of these women who love and accept themselves makes them very attractive to men. They also have those curves that men crave and aren’t afraid to show them. The men in this interview also admit that social pressure tend to make men worry about being judged for this attraction.

Are Curvy Women better in bed?

We knew but did you? 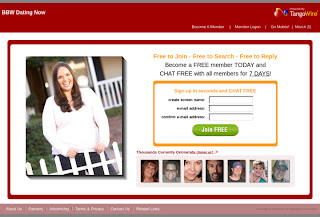 More than Ever Online dating is Booming